Inbox vs Gmail: Why I Made the Permanent Switchover 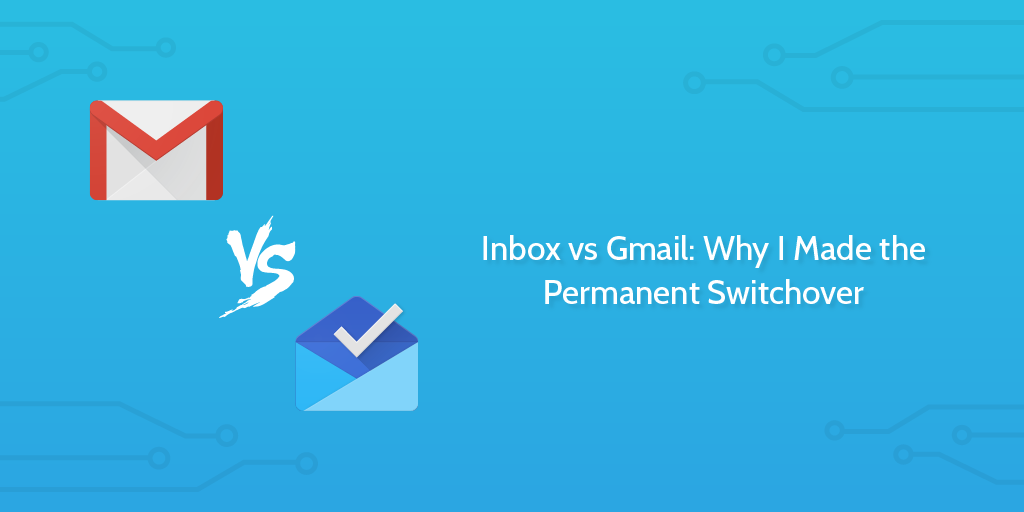 While writing a recent article for TechCrunch about empty states in app design, I came across Inbox by Gmail — the app which rewards you with a sunny sky when you hit inbox zero.

Inbox vs Gmail: The Full Comparison

I’m probably a little late to the party, and as much as I love Gmail I feel that Inbox is a smarter and more intuitive way to process a bulging inbox.

Vinay covered why task snoozing is so powerful over on his Abstract Living blog, which made me want to try an app with the same mechanics.

If you’re anything like me and have these traits, you’re probably going to get a lot out of Inbox:

Delightful, right?! It looks even better on the iPhone because it animates slightly. After 20 minutes of looking for a way to record my iPhone’s screen and buying some junk app which doesn’t actually do it, I’ll leave that to your imagination.

But first, getting back on track: here’s Inbox vs Gmail (The Showdown).

In a similar way to how Gmail has stars, Inbox has pins. In my opinion, pins are more useful. While you could filter Gmail to show only starred items, that’s more friction than I’d like, and, unlike Inbox, starring doesn’t actually… do anything else.alt

A pinned email sits at the top of your inbox and looms over you, preventing you from reaching the blue sky until you do something about it. If you need something to be at the top of your list before you ever get round to it, you’ll be a lot more productive with pins than stars.

It’s not just that, either. Pins become exceptionally useful when you get round to batch archiving.

While I was still a Gmail user, I was always looking for ways to quickly process all of my unimportant emails — you know, things like notifications you’ve already read or offers you’re only occasionally interested in.

In Gmail, I tried ‘select all, unselect a few, archive all, next page, repeat’. I tried furiously bashing keyboard shortcuts, hammering through my inbox like it was a fearsome beast to be destroyed.

In Inbox, you can click the tick icon above each group to sweep all unpinned items

Just like how Any.Do has a task snoozing feature (which has started running my life as of this week), Inbox has the same for emails.

You can snooze an email ’til the evening, tomorrow, next week, or pick a custom time. Snoozing essentially moves it to another category, away from your inbox, then bounces it back over whenever you want to deal with it.

Counter-intuitively, I’ve found that putting off tasks until later has made me more productive. That’s because I’ve at least ‘touched’ them. Leaving them as unread and letting them slip further down was something I was prone to do with Gmail, even for exceptionally important things.

While snoozing can be a good way to get a quick reminder, there’s a way with Inbox that you can create to-do list items from your emails.

Create one-click reminders from inside your inbox

Inbox is pretty smart. It parses your received emails for action items — things like ‘send me the images’ or ‘call my assistant’ — and offers you to add them as reminders. While it’s regrettable that these can’t be sent off somewhere like Any.Do with an integration, I check my inbox often enough to be able to act on them anyway.

The minimalist UI had me scrambling around for a while trying to figure out how to actually add a reminder. Turns out that when you pin an email, you get the option to add a reminder of why you pinned it and what needs to happen next.

Use smart Responses on Android and iOS

Last month Google announced over on the official Gmail blog that Inbox for Mobile would be getting some special treatment. It came in the form of facilitation for slothfully lazy individuals like myself.

When Inbox thinks that you’d be fine to fire off a canned response, it shows you three options underneath when you open the email. 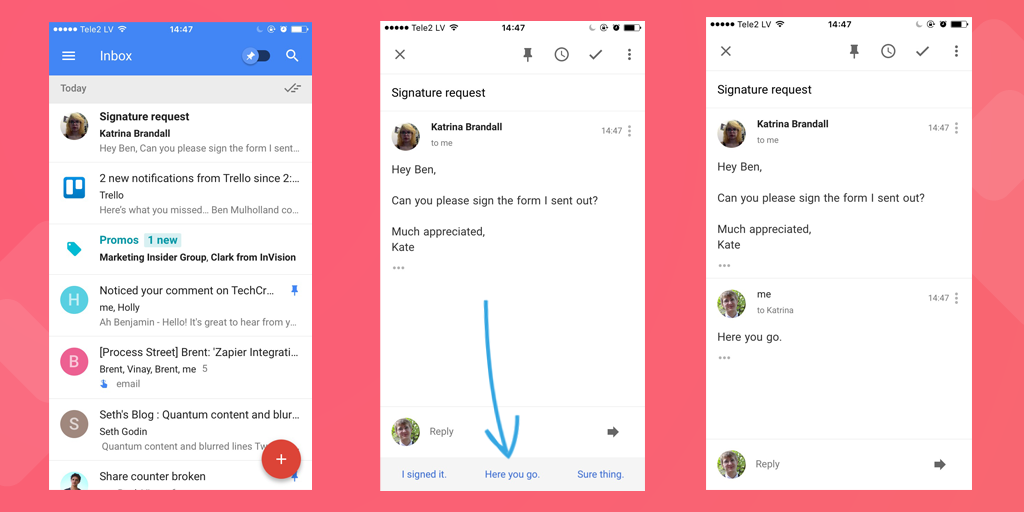 I can only speak for myself, but this really helps me get around to answering emails I’d probably not reply to otherwise.

On the web version, Inbox also offers templates. These are similar to the canned responses on Gmail you can enable through Labs. 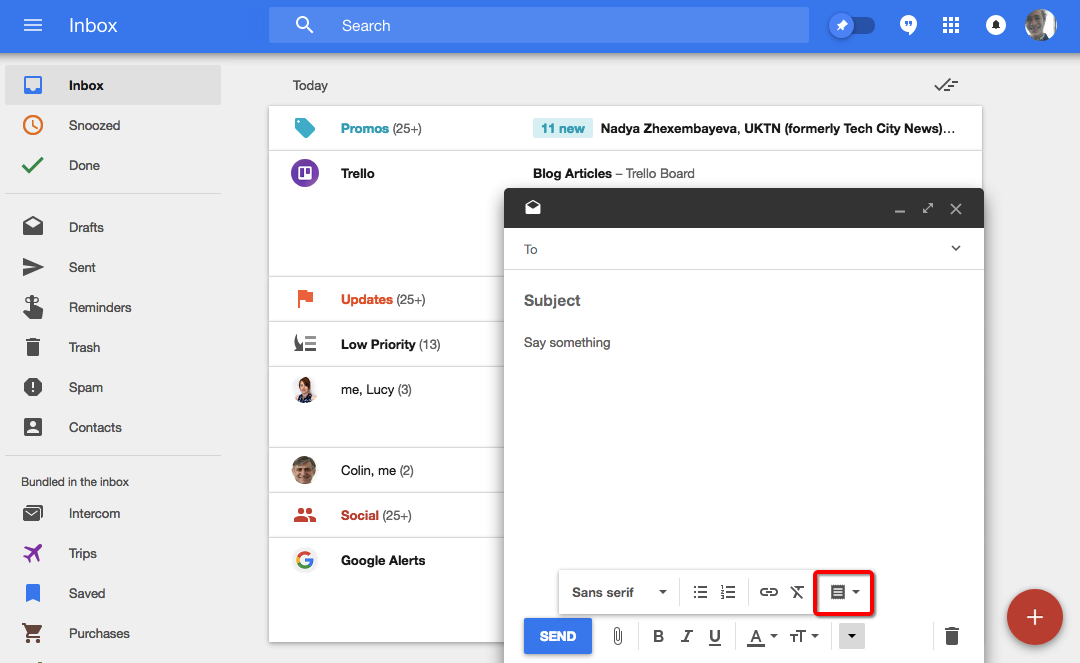 Click the plus, and then open the template menu. Inside, you can manage your templates: add new, edit, delete, etc. 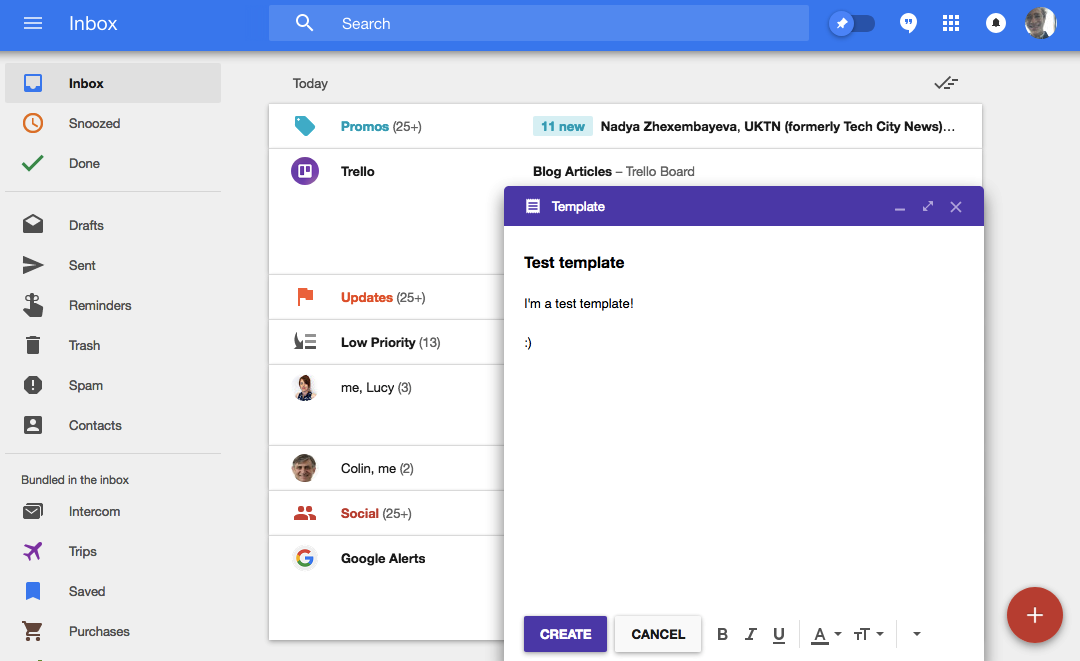 If you find yourself typing the same emails over and over again, or copy-pasting a template from your computer, just add a new template instead to save yourself some time.

You can process your inbox at lightning speed, even on mobile 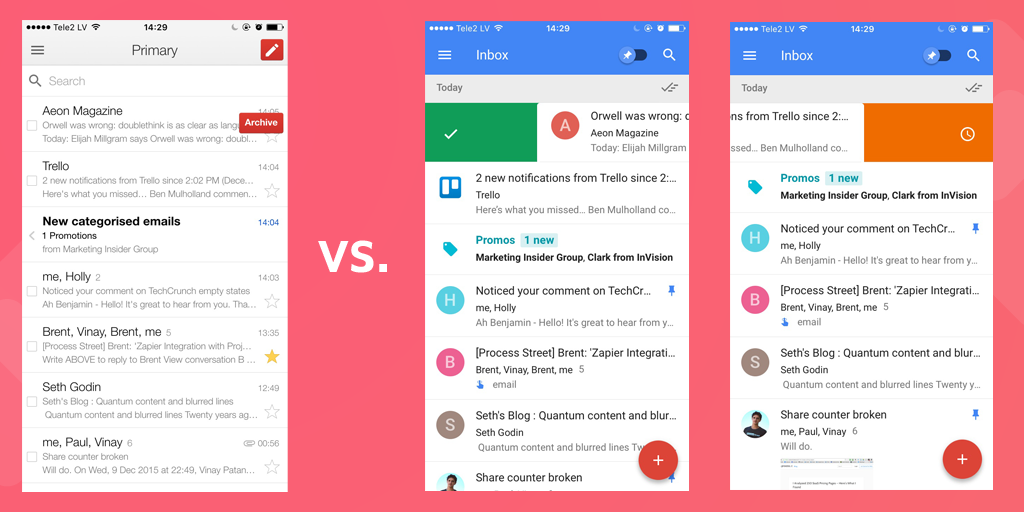 Here’s a demonstration of what happens when you swipe an email left or right on Gmail vs Inbox. On Gmail, swiping right brings up the option to archive it, and left gives you the hidden menu.

You can still keep using the Gmail/Zapier integration

Since Inbox is just basically a new user interface for Gmail, you can keep on using your Zapier integrations with the warning that stars no longer work. Stars aren’t a feature Google decided to continue with Inbox, so we’re going to have to wait until Zapier‘s workflow automation platform supports it.

For now, you can still use integrations involving tags. Why don’t you try these?

While writing this article, I realized that there are probably a lot of people who are already deeply ingrained in their Gmail workflow that would have a hard time making the switch. Here are some problems with Inbox that might hold you back:

If I’ve convinced you to make the switch, you’ll have to download the Inbox by Gmail app for Android or iOS first. You can’t just go to it on the web (for some arcane reason).

Let me know why I’m totally wrong (or right) in the comments below and we can have a fight (or a hug).

Bonus upgrade: Get our 25 Gmail tips and become an overnight power user

Since Inbox is built on top of Gmail, you can use a lot of tricks designed for Gmail with Inbox. That means you can use this list of 25 Gmail tips to power up your Inbox experience.

Click the button below to get your Gmail tips.

How can we assist?

We are always excited to meet new brands, plan new markets and find new solutions. Don’t be shy, fill in your details and hit submit!

We are always looking for great new businesses and individuals to add to our curated network of business resources. Don’t be shy, fill in your deets and hit SUBMIT!